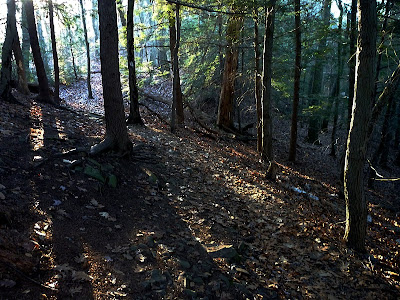 I spent part of the afternoon today running some of the trails on the nearby Holyoke Range, Mt. Skinner particularly because of it's steep terrain. Around 3 pm I was coming back up to the summit when I found myself bathed in this luxurious light and it reminded me it's only 11 days until the Winter Solstice when, happily, the days will begin to get longer again--pointing us towards summer but hopefully not before we get to enjoy the holidays and a long winter with lots and lots of snow. 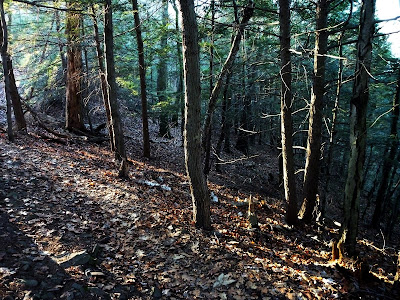 The green in the background represents the dense stands of hemlock along Mt. Skinner's summit ridge and that sweep down across its north face. 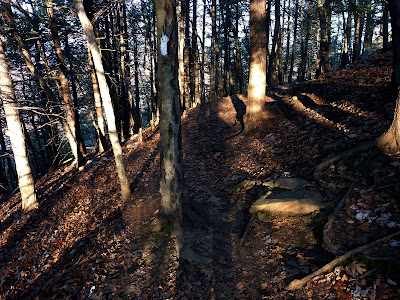 It was in the low 30s all day keeping with the mild fall we've been having, but below freezing night-time temperatures have finally put frost in the ground and I hope the same is true for the White Mountains. It would be great to have at least a couple of inches of hard frost before the deeper snow arrives. 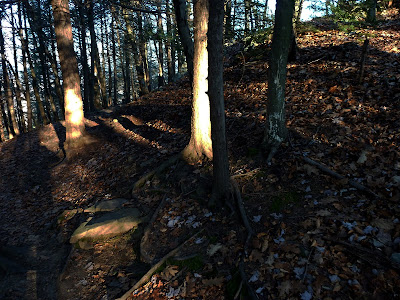 At any rate, I just wanted to share this lovely winter sunlight. It's reminiscent of the light I was hiking in last Saturday on Kinsman Ridge.
Posted by Alex MacPhail at 2:37 PM No comments:

12-6-11 Editorial: The Hut Traverse as a Unique, Challenging, Local Treasure