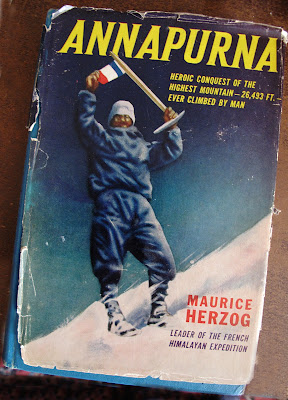 Maurice Herzog died on December 13th at his home outside Paris, France. His obituary was printed on December 14, 2012 in The New York Times. Maurice Herzog was the leader of the 1950 French Annapurna Expedition and was one of two French climbers to reach the summit of Annapurna on June 3, 1950. I first read Annapurna, the "official" account of the expedition when I was 9 or 10 years old, about the time it was published in 1952. The photo above is of the first copy of Annapurna I owned. I own several now. I paid around $2 for them at used book shops over the years. Happily, two years ago I obtained a copy signed by Maurice that cost a bit more than $2. His book, when I began reading it the first time, set me on fire. I wanted to climb Annapurna and all the high Himalayan summits. And even though Maurice, at least in the image cast by the book, made a pretty good  "childhood hero" I wasn't as taken by him, singularly, as much as I was by the entire group of climbers, including the sherpas like Ang-Tarkay, and the astonishing story of their bravery and endurance. It was a great and heroic adventure filled with suspense and the perfect idyll for a 10 year old boy. It was real and rollicking; a cliff hanger.

Annapurna was and still is vastly popular. Nearly 12 million copies of Annapurna have sold so I'm not the only one who's in love with this story in its time and place. It was, for me and probably many other readers, life changing, like grabbing hold of a high-tension electric cable. In 2000, True Summit, a book written by Dave Roberts, sweeps away the magical illusion represented by Maurice's account of the expedition telling how Maurice suppressed the true story of what occurred on the expedition by hijacking "competing versions" to the one we've all read and admired, versions represented by the experiences and diaries of the other climbers. Dave, I think, was as enthralled by Annapurna over the years as I and most of it's millions of readers and he may have felt betrayed by the "truth" of what had transpired which boils down to Maurice's heavy handed management of expedition publicity and the attendant heirarchy. Maurice demanded a unified, smooth-running image of the expedition rather than a more inclusive, democratic one that would have allowed inputs from all of the members. Terms of membership in the expedition required the climbers to sign a contract, good for 5 years, that they would not publish their personal stories of the climb. And some like Louie Lachenal were pushed out completely as Dave points out which, for a fine climber like Louie, was unconscionable. I know that the 1936 German Nanga Parbat expedition, the 1938 British Everest expedition, and to a certain extent, the 1951 Swiss Everest expedition, the 1954 Italian K2 expedition almost all had the same draconian style of leadership evoked by Maurice. The 1954 K2 expedition was the most infamous for having a rigid heirarchy in place that created covert policies and in-fighting. Miriam Underhill, in a review of Victory Over K2 by Ardito Desio, the 1954 K2 expedition leader, observes "from Desio's writing we gather that he was not one of a group of comrades but a general directing his troops." (Appalachia, December 1956, p. 286) Exceptions to all of the above include the "unsuccessful" American 1939 and 1953 K2 Expeditions led by Charles Houston (the 1953 expedition was co-led by Bob Bates) and the account of the 1953 K2 expedition, The Savage Mountain, is much more "democratic" and transparent even around mundane details.

The huge issue of expedition financing for these huge enterprises is in-twined with expedition publicity. Income to finance large expeditions that go out for months to climb the high peaks is dependent on donations, government support, and book contracts. Many of these large expeditions are extensions of strong nationalistic feelings and are motivated by intense national, or, as with the Italian '54 K2 expedition, strong regional competition. The 1950 French Annapurna expedition had similar issues to the ones mentioned above of strong egos, covert politics, personality conflicts, etc, as other expedition have (as well as a lot of sports teams). Would the expedition have been more successful with more democratic leadership? One thing we've learned in the past 100 years is that in the Himalaya and Karakorum mountainweather is not often forgiving. Expediency is essential. I do recognize, too, that Dave is pointing out how Maurice's controlling behavior went far beyond what I have reported here. Maurice had a reputation, certainly, of being a fierce megalomaniac, and at the same time is revered in France.

Annapurna gave us one of the first great Himalayan climbing stories and gave the world a wonderful  story about a successful, heroic ascent of a high Himalayan summit and described beautifully what human beings can accomplish. Although my admiration has always been slanted towards Louie (Lachenal), Ang-Tarkay, and Lionel (Terray), I admire Maurice in that he was a part of the expedition giving it a unified purpose, and, at the same time being one on the "comrades", sharing the load, and struggling alongside everyone else, adding his courage, skills, and endurance to its success.
Posted by Alex MacPhail at 5:37 PM No comments:

White Mountain Sojourn offers an accessible and hopefully exciting way to interact with the landscape and the richly diverse natural history of the White Mountains of New Hampshire through a series of “snap shots”. These snap shots will include photos, research articles, and some personal observations from folks that work in and/or spend a lot of time in the mountains as well as observations provided by you (the readers). These snap shots will focus mainly on the natural history of the Whites during the past 10,000 years, or so, and they'll have the potential to show the subtle as well as dramatic changes in the natural history of the White Mountains over that period of time. The idea is that we often look at our landscapes from a single dimension of time, namely the immediate present, and then miss a lot of what is really going on there. The exciting part can be returning time and time again and seeing and understanding what goes on when we're not actually looking. The White Mountains are also a back drop for myriad human activities that took place all those thousands of years. White Mountain Sojourn will also be looking at some of the changes occurring at the present interface of human activity within this wild, beautiful forest ecosystem.

A little more about the author


I grew up in the White Mountains of New Hampshire. I lived in Intervale and North Conway, NH, from the late 1940's to the late 1950's. In 1961 I started working for the Appalachian Mountain Club as "croo" in the huts and eventually as a guide and naturalist. I continued working for the AMC during my college years. I took an inordinate amount of time to finish my undergraduate studies in plant ecology. To make it look like I was being productive I began writing what I hoped was an impressive-sounding Ecology of the White Mountains. With that grandiose title I received some useful notoriety but the problem was that I never really wrote anything. I kept up a facade the secret of which was just to act really cool. I pretended to be busy with small research projects that were supposed to relate to my Magnum Opus. One was titled "Comparative Frost Hardiness in Two Species of Larch." It was ingenious if only because it allowed me a great deal of free time during the warm months. I did manage to help others finish their research projects. I assisted L. C. Bliss for a while as he put together his brilliant Alpine Zone of the Presidential Range and also helped my friend and colleague Larry Collins with his limnological study of the alpine lakes of the White Mountains. So, to bring you up to date Ecology of the White Mountains is still unfinished--a collection of musty, dog-earred notebooks just itching to get done--if only for old time's sake. So come along while I get it out of the box and rethink and redesign it. You can help by adding your thoughts, articles, insights, photos, criticism, etc. We can revisit every mile of the "Whites", bask on the summits, run down the trails, delight in the beauty.

Note: Appalachia is the journal of the Appalachian Mountain Club. It is published twice yearly. It is now in it's 133 year of publication. Information on Appalachia can be obtained by contacting the AMC, 5 Joy Street, Boston, MA 02108.

Harris, Stuart K., Plants of the Presidential Range, a seven-part series published in Appalachia 1940-1946 with reprints published by the AMC.

Harris, Stuart K., Merriam Underhill (and a host of other botanists), Mountain Flowers of New England, AMC Boston, 1964. out of print.

Newcomb, Lawrence, Wildflower Guide, Little, Brown, Boston, 1977. A comprehensive manual of plants in the Eastern US.

Steele, Frederick L., At Timberline; A Nature Guide to the Mountains of the Northeast, AMC, Boston, 1982. out of print.