5-22-13 Scotland's Mountains; a comparison with the White Mountains of New Hampshire. 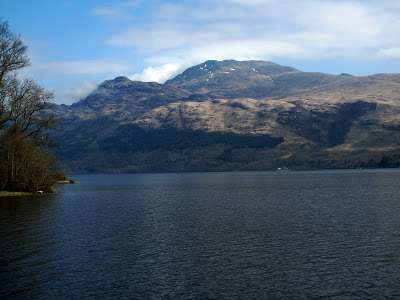 Ben Lomond and Loch Lomond on May 7th with some snow still on the south slope. There was a good deal of snow on the north side which is a bit unusual, but Scotland, like New England, had a cold April and spring was somewhat delayed. I landed in Glasgow early enough on the 7th and early enough in the day to travel north towards Glen Coe and Fort Williams at a leisurely pace. Relearning the knack of driving on the left kept me busy for most of the morning. It's amazing how fast you adapt when a mistake could be deadly. On day one I had moments of panic due mainly to the narrow roads and really fast moving, on-coming traffic. Once I observed an oncoming driver cringe as he feared for the worst when I was slightly over the center line. 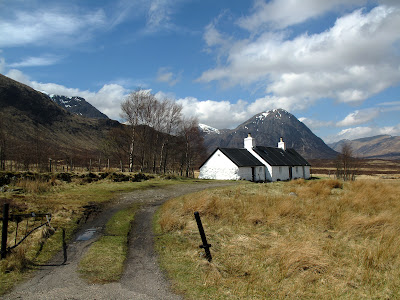 The first time I visited Glen Coe was a moody, gray day 50 years ago on holiday hitch hiking through west Scotland while a student in Edinburgh. I turned down a ride just to walk over Rannoch Moor the better to enjoy the scenery that had played a role in Robert Louis Stevenson's Kidnapped when  David Balfour, the hero escapes death by crossing in a storm during the Jacobite uprising in 1689. 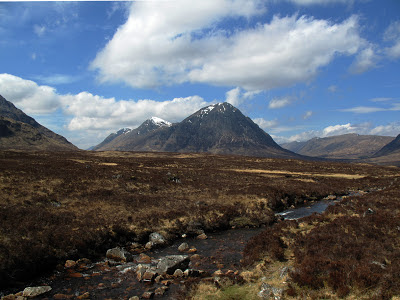 That first visit was in mid-October 1962 and, true to form, as I got to the top of Glen Coe great sheets of rain were blowing horizontally up the Glen directly into my face and the mist was churning wildly around me. I was given brief glimpses of Buchaille Etive Mor (in the center of this photo), and Buchaille Etive Beag (in this photo it's behind Buchaille Etive Mor). I was numb with cold when I got to the Glen Coe youth hostel. Some would say it was terrible weather. I, on the other hand, was happy to experience it as I had imagined it would be. The Glen, too, was as I had imagined: bleak, barren and beautiful. On this, my most recent visit, when I finally had the enclosure of a comfortable car to protect me from foul weather, it was as hot, dry, and clear as a summer day in Montana or Wyoming back in the US. It was dazzlingly bright and lovely. In the above photo Glen Etive is on the left, and, in the center, is Stob Dearg, the highest point of the Buchaille Etive Mor ridge. 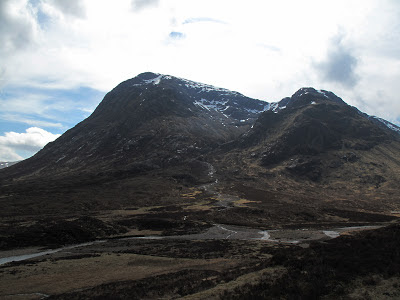 Buchaille Etive Mor from the west. In the mid-1960s Glen Coe and Ben Nevis became the center of a new wave of Scottish climbers like Hamish McInnes and Dougal Haston who succeeded in raising rock climbing standards and mountaineering to new limits. Buchaille Etive Mor's has numerous Very Severe climbs on its northeast face including one of the longest gully climbs, known as the Chasm, in the UK, all made famous at that time. Dougal's colorful descriptions of Glen Coe in the 1960s take up the introduction and first chapter of his autobiography In High Places. 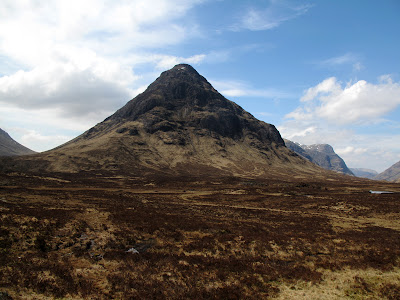 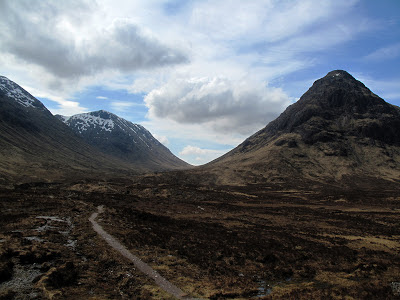 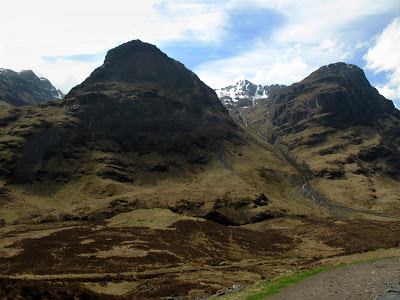 Two of the three Sisters of Glen Coe;  Gearr Aonach on the left and Aonach Dubh on the right. The third sister is called Beinn Fhada and is to the left of Gearr Aonach, The famous Hidden Valley, or Coire Gabhall in Gaelic, is reached by the track that runs between them and is located behind Gearr Aonach. Coire Gabhall was used by the McDonalds to hide cattle they rustled. A confusing bit of history is involved in the famous "Massacre of Glen Coe" that occurred on February 12, 1692 when close to 80 McDonalds died either from wounds or from exposure to the weather after being attacked by other clans, most notably the Campbells. The dead included women and children. The massacre was considered a just punishment for the McDonalds' refusal to sign an oath of loyalty to the new king and queen, William and Mary. Failure to recognize the new monarchs was predicted to cause severe reprisals by the British. It's likely that more issues were behind the massacre than loyalty to the crown. Part of my family, my father's side, was from the north of Scotland. My paternal grandmother was from the Isle of Lewis, a weaver, and could only speak Gaelic. On previous trips I'd visited with relatives but they're no longer living. The purpose of this trip was to have a proper vacation, which  I've been putting off for years, and a yearning to visit Scotland again. 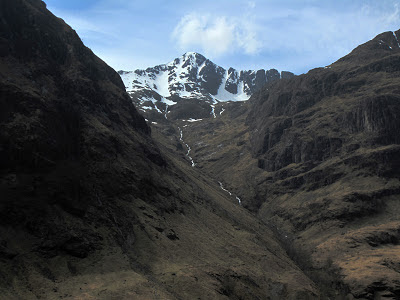 Looking up again at the track to Coire Gabhal.  Bidean Nam Biam is in back with the ridge to Stob Coire nan Lochan,  another high summit on the ridge, off to the right and can not be seen. Winter conditions prevailed on the higher summits the entire time I was in Scotland. I'd been looking forward to a traverse of Bidean Nam Biam which is a classic Glen Coe hike. I am planning to make some comparisons of the mountains of Scotland with the White Mountains of New Hampshire with marked similarities in weather, fauna and flora, public access, geology, and contemporary issues dealing with conservations and over sight. Gazing up at Bidean Nam Biam reminds me a bit of looking up at Boott Spur above Tuckerman Ravine on Mt. Washington. 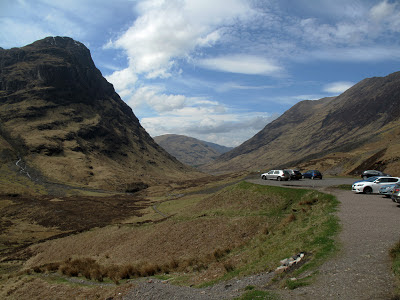 Looking west down Glen Coe towards Loch Leven and the village of Glencoe. Aonach Dubh is on the left. The Aonach Eagach ridge rises on the right, the north wall of the Glen. The northwest face of Aonach Dubh offers challenging rock climbs. What makes Glen Coe unique is the local geology 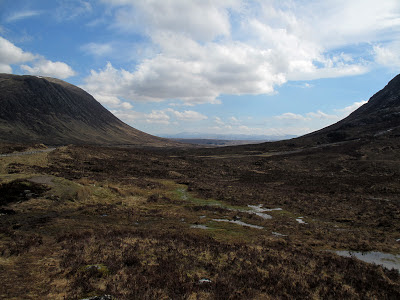 Looking east toward Rannoch Moor. Glen Coe, like the White Mountains, was subjected to diffferent periods of glaciation. The Beinn Nam Biam is a fine example of both carving by both the large ice sheets as well as small alpine glaciers. Glen Coe, by the way, is owned by the National Trust for Scotland. 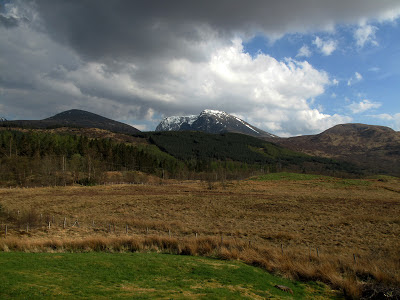 Around the corner from Glen Coe is Fort Williams at the head of Loch Linnhie and just east of Fort Williams is Ben Nevis, the highest mountain in Scotland (Great Britain) at 4,409 feet asl (above sea level). The sea is close to the base of the mountain so 4,409 feet represents its "relief", or, as the British like to say, "it's prominence". Ben Nevis, then, has the same relief as Mt. Washington.

Ben Nevis was another hike I was planning to make but conditions on the upper portion of the trail required crampons and an ice axe which I didn't have. On Tuesday night (3-7-13) I talked to two Polish hikers who'd just returned to the base after a 9.5 hour round trip via the regular path. It had taken them much longer than expected due to the summit conditions which they called "treacherous" due to ice and snow. I've climbed Ben Nevis a number of times and in all kinds of conditions but I've never been on the summit in clear weather. 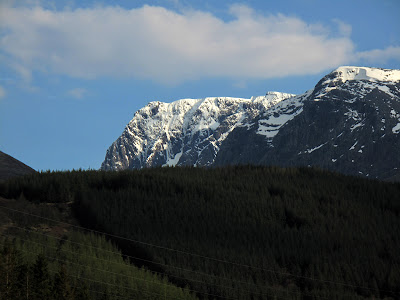