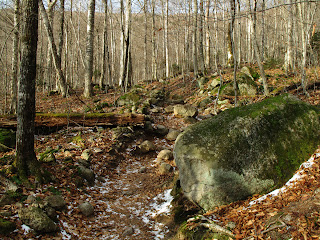 Guess where I'm off to again? It feels like this was my Lonesome Lake year, the result of a large measure of intense work and deplorable lack of time. Lonesome is closest to home and therefore the easiest to get to and in this case hiking there had the extra motivation of wanting to see Miles Howard, currently one of the Lonesome Hut caretakers, before he leaves the huts and the Hills as he moves on to more worldly things. It's hard to believe that the last time I saw him was at Carter two summers ago! I got on the trail early when sunlight was just dripping down the ridge into the bottom of Franconia Notch highlighting these lovely fall colors. 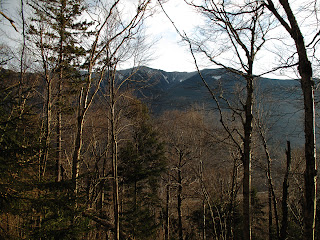 Franconia Ridge, across the Notch, with Mt. Lincoln in the center and Little Haystack a bit to the right. Mt. Lafayette is off to the left (North) and out of the photo. 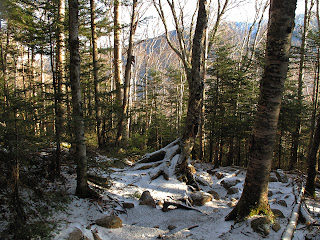 The light was stunning. The weather forecast suggested a peach of a day for hiking with temps in the 20s, light wind and a cloudless sky. It didn't actually pan out, but the early morning fit the forecast well. The Lonesome Lake Trail was varnished with a smooth coat of slippery ice  so that traction was necessary. I was wearing Micro Spikes (Kahtoola brand) and they worked well, as they usually do, on the ice at lower elevations. I had a few problems with them higher up, though. Mt. Lafayette is visible through the trees. 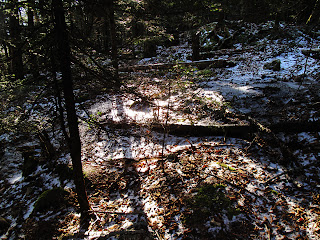 I'm not sure how many other people marvel at the natural light, generally, or if it's mostly a passion for painters and photographers, but light has always been a very important ingredient in my life one that I am constantly aware of down to the smallest variations in tone. That is true everywhere I've ever been. I'm sensitive to the most minute variations in the light and light has always informed my sense of place whether its in the Sierras, or Scotland, Nepal, Morocco, or on an afternoon in September in the White Mountains. I find the seasonal variations in the light in the White Mountains exciting. I experience light in the same way I experience music with its seemingly infinite tonal gradations. They've both have had a huge impact on my life. (I'm writing this on 12-16-12 which is Beethoven's birthday. It's snowing lightly. I'm listening to Rudolph Serkin and Pablo Casal playing Beethoven's sonata #2 for cello and piano. If I close my eyes I can see snow swirling in the wind, falling on the ice at Lonesome Lake and in the woods around the hut where it hisses on the dry leaves and up on the ridges and summits it races on the wind with sound kind of like a cello.) 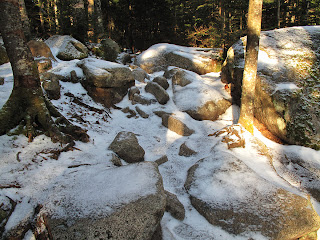 The Sierra Club, in the 1960s, published a number of books highlighting the Sierra Mountains, the land of John Muir, with photos by Ansel Adams including one titled Yosemite and The Range of Light. In the mid-1970s I was trying to find a publisher for my book of photographs that I took on my walk across the United States in 1973-1974 and by chance met and briefly talked with Ansel Adams at the New York Graphic Society's offices in Boston. It's difficult to describe what an enormous pleasure it was to sit briefly "at his knee" and talk about our mutual passion for light and how it effects us. I was a student of Ansel's long before that meeting by way of the first Sierra Club book published, Words of the Earth, which paired many of Ansel's photos with the poems of Cedric Wright. It was wonderful and "heady" to talk about our favorite photos, our own, and those of several other photographers like Paul Strand and Dorothea Lange, and which photos, over all, we wish we had taken. I lost myself in describing to him the magical qualities of the light here in the White Mountains, how it has beguiled artist for centuries, and comparing it favorably to the mountains of the West. For that bit of time we joined in our long-felt sensitivity to light and our shared passion for black and white photography. 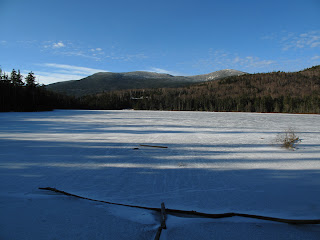 The Kinsmans, South (center left) and North, looking beguiling at least from this distance. The ice on the lake was as smooth as glass. 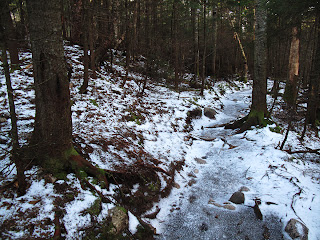 The lakeside trail, on the eastern shore, was a ribbon of ice and frozen crust. The sun only reaches it, in the winter, for a few hours a day. 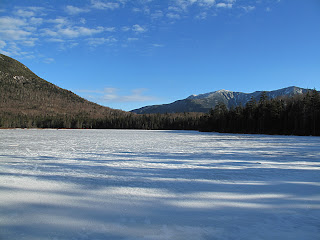 Then there's this view. It felt good to be back at Lonesome Lake and to remember the brief period of time that has passed since I was swimming out across it and under it with my snorkeling gear. 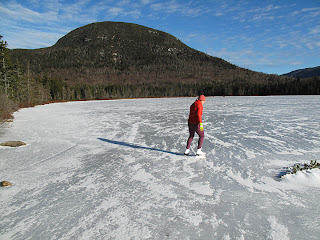 One of the Lonesome caretakers, Beth Swartz, was testing the ice as she skated out tenuously onto the lake. She is making a project of skating on all the mountain lakes this season. Her caretaker stint ends soon and she's undecided where she will go next. If you refer back to a blog entry from last December around this date you will see a photo of Beth when she was begining a stint, also for the AMC, as "hut checker", a coveted position in which she gets paid to hike. She said she may go West for the coming winter. 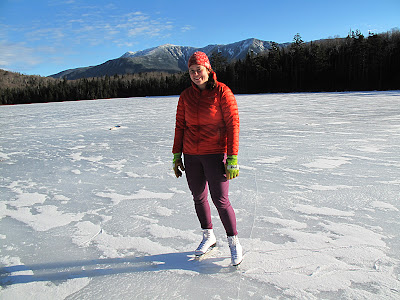 It was great to see her again. Our conversation centered on whether it was wise to try crossing the lake on the ice (if the ice was thick enough to support our weight?) The consensus was that it would be wiser to wait for a few more days of cold weather. The qualifying point was that if either of us did go through the ice, in all but a few places, the lake is only about 4 feet deep and shallow enough to stand up with heads and shoulders above the ice. But who wants to get wet? Beth was about to leave on days-off. Miles Howard was due back at the hut that afternoon. Later, as I headed home, I met him at the parking lot where we got to talk for a few minutes and catch up a little. 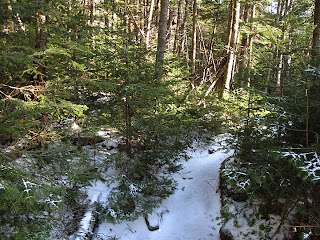 The lower section of the Fishin" Jimmy trail roller-coasters through a forest of spruce-fir-birch trees and is wet in several places. The wet translates into "icy" in the cold months. The iciness varies from month to month and year to year. Last year there was very little ice on the trail. This year the ice over flowed most of the trail making it difficult walking in several sections. I spooked a large moose that was moving on the trail in front of me and I heard ice braking as it crossed a brook and quickly headed uphill and away from me. 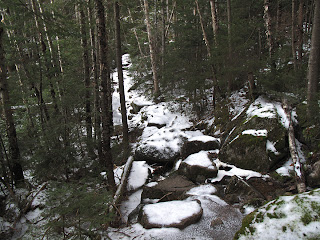 This was one of the easier section lower down, close to the hut, on Friday. 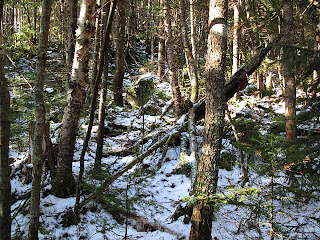 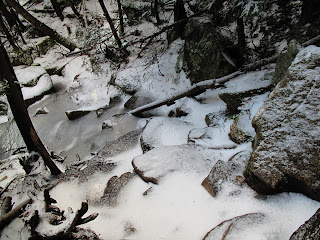 This is a typical conditions of the trail above 3400 feet on Friday and was at the bottom and easiest section of the very steep pitch just below Kinsman Junction. The ice was of a quality that made it difficult to find traction with Micro Spikes. They tended to skate rather than dig in making the steeper section a bit sketchy. Part of the problem was that I hadn't sharpened my spikes since last fall so they had lost their bite.

Some, or maybe all of you, know about a new trail crampon made by Hillsounds that similar in most respects to the Kahtoola micro spikes. The "teeth" are longer and the points are hardened with a chisel point and may out perform the micros on the kind of ice I ran into Friday. They're the same price as micro spikes: $60.00. ( You should go to Hillsounds on the web for comments by users.) 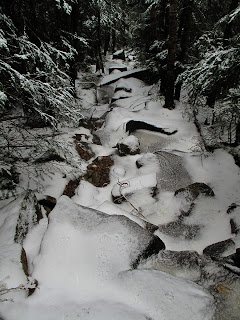 I continued up but was slowed by the degree of difficulty on the last 200 feet of the pitch. It became a real ice climb. Because I was alone and it was a weekday (with few hikers out) I had to think twice about each move I made to make sure I was playing it safe. I was cautious enough to pack my camera away where it wouldn't get damaged if I fell. I used a lot of "vegetable holds" and/ or bushwhacked where I could but otherwise climbed tenuously. In these photos the crusted snow looks safe enough  but it's sitting on hard ice. Still, the micro points found some purchase on the hard snow so it was safer than the ice . My steel Kahtoola crampons, which were in my car, would have made this hike a romp with no worries. Later, after I had gotten back to the hut a group came down from the ridge with Micro Spikes and also complained about how inadequate they were for the conditions. 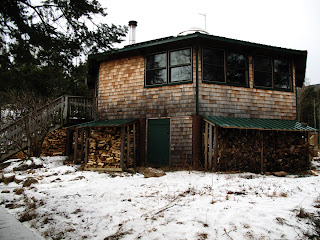 The peachy day turned less and less enchanting as I got to the ridge. Clouds appeared, a wind picked up and the temperature dropped as a cold front moved through. The clouds descended to the ridge and it got quite dark. I had gotten to about 4100 feet on North Kinsman when I turned back. I was mainly psyched-out (scared) about descending the ice pitch. I wanted to take all the time I needed. It took me an hour to descend the two miles back to the hut where I arrived around 1 pm. The combination of weather and time of year made it feel like 5 pm. I changed into dry clothes, had a cup of tea and headed down to the car. With the exception of Beth in the morning and the group that came down just after me, I saw no one all day. I enjoyed the solitude and the coziness of the hut as I have so often. Lonesome is such a lovely place. 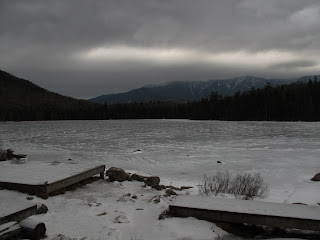 Storm clouds over Lafayette make it quite a different scene from the morning. 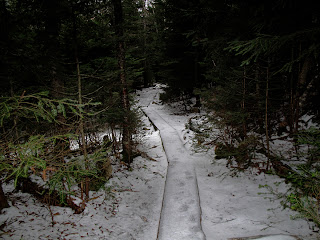 The trail around the lake in reverse. 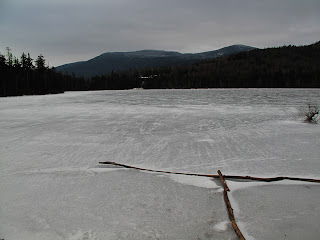 Looking back at the Kinsmans above the lake. 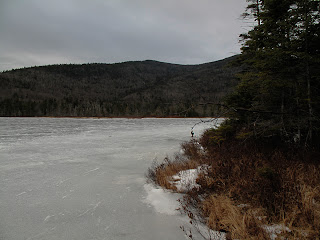 Looking west across the lake at the northeast section of Kinsman Ridge where it starts to rise towards the summit of Cannon Mt. This is an interesting photo of the old Lonesome Lake Trail familiar to me as a kid. It only becomes noticeable in the fall. The current trail basically a long switch back, like a jack knife, but until the 1960s there were several steep, short switch backs all the way to the height of land. The point of interest for me is how little the older trail has grown in over 40 years, like the old Osseo Trail I was on a few weeks ago. 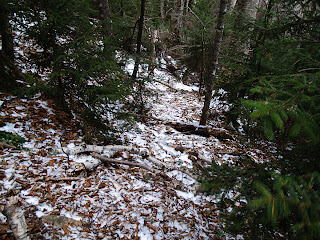 This is looking downhill at that same section of the old trail. 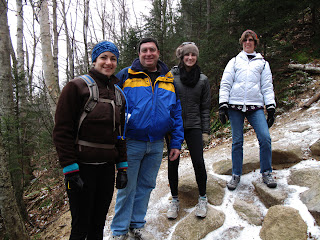 A family from Peterborough, NH, on holiday and on their way back down after an attempt to reach the Lake. They were thwarted by the ice on the trail and not having any traction devices, had given up. I caught up with them as they were trying the age-old technique of sitting down and sliding on the icy sections. They were in high spirits and having a great time. 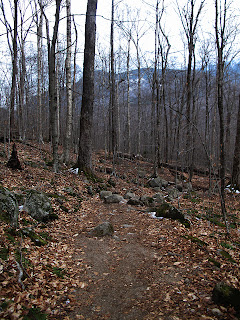 The wonderful fall colors, again. Agony Ridge and Mt. Lafayette are behind the trees. 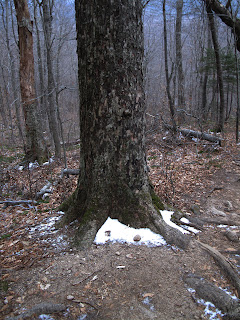 This is one of my favorite of Cedric Wright poems from the Sierra Club's book Words of the Earth:


"Tree qualities, after long communion, come to reside in man.
As stillness enhances sound, so through little things
the joy of living expands.
One is aware, lying under trees,
of the roots and directions of one's whole being.
Perceptions drift in from earth and sky.
A vast healing begins."

Posted by Alex MacPhail at 2:11 PM No comments: