12-1-09 Resources on the Geology of New Hampshire 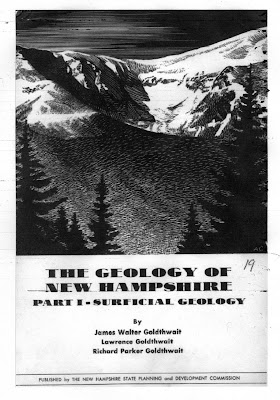 I had the good luck to find this out-of-print booklet (with this lovely cover) "on line" at a website I stumbled upon recently. This is Part I of a three-part series published by the New Hampshire State Planning and Development Office on the geology of the "Granite State.". Part II is Marland Billing's gem, "The Bedrock Geology of New Hampshire". Part I, written by two generations of Goldthwaits and published in 1951 is a great read. It's only 84 pages long, comprehensive, and well written. It's brilliant in it's clarity and practicality. It sorts out all kinds of questions I've been mulling over about the glacial and post-glacial period in the Whites that aren't explained as clearly in his other writings. It's written for the non-geologist, for one thing. I recommend reading both Part I and II. They're PDF files and you can read them right on line or download them. The web address is: http://des.nh.gov . On the right-hand side of the Home page under Quick Links click on Publications. In the middle of the Publications page look in the list of links for Geology of NH Series. Click on that and the three booklets are listed by titles and authors. Part III is on the "minerals and mines" of New Hampshire by T.R. Meyers and Glen Stewart.

I'm mentioning this as a way of saying I'm still working on the two unfinished entries in the blog: the felsenmeer piece from a few weeks ago, and the research piece(s) from the Gale River Slide on soil development and plant succession last added to in September. I plan on one more visit to the site when there is light snow on the ground to take more measurements. I'll put a little flag up when each is complete.

To a reader who signed her name "Kate" to some comments on the blog, and I'm not sure if that's Kate the AMC naturalist or not, I apologize for not responding sooner to your input regarding glacial erratics and, also, 'frost hardiness' as a defining factor in timberline placement. I plan on including your comments in the felsenmeer piece as I finish it and thanks, by the way.

Thom Davis sent me some papers dealing with the controversial question of whether, or not, local, alpine glaciers continued to exist on Mt. Washington and the northern Presidentials (and Mt. Katadin in Maine) after the down wasting of the Wisconsinan continental glacial 'sheet'. The papers have a lot of useful info on glaciers and other aspects of White Mountain geology so thanks Thom.

Lastly, I found another great resource for the geology of the White Mountains in the June 1934 Appalachia titled, "Geology in the Franconia Region" by Charles Williams, of Harvard University, who was working along side Marland Billings on a project to map the bedrock geology of all the unfinished quadrangles of New Hampshire which included several in the White Mountains. Williams mapped the Franconia quadrangle which included the area between Mt. Hale in the east west to the Kinsmans, and from Franconia village in the north to North Woodstock village in the south. His maps are, and the article in general is, excellent for understanding the relationship between all the various granites, the granodiorites, syenites, breccias, the Moat volcanics and the metamorphic bedrock of the Whites relative to the oft mentioned Littleton Schist bedrock of the Presidential Range. If anyone's interested I'll photocopy the article and hard mail it to you. Complete sets of Appalachia are available at the AMC library at 5 Joy Street in Boston, a (very) few libraries around New England, and at the AMC Highland Center at the top of Crawford Notch on NH Route 302 (near Twin Mountain, New Hampshire). The Highland Center has a large, comfortable, well-stocked library where you can sit for hours and hours uninterrupted (and another room with a large fireplace where you can sit and read as long as you want, and a place to buy comestibles like coffee, tea, and sandwiches).
Posted by Alex MacPhail at 7:31 AM No comments:

White Mountain Sojourn offers an accessible and hopefully exciting way to interact with the landscape and the richly diverse natural history of the White Mountains of New Hampshire through a series of “snap shots”. These snap shots will include photos, research articles, and some personal observations from folks that work in and/or spend a lot of time in the mountains as well as observations provided by you (the readers). These snap shots will focus mainly on the natural history of the Whites during the past 10,000 years, or so, and they'll have the potential to show the subtle as well as dramatic changes in the natural history of the White Mountains over that period of time. The idea is that we often look at our landscapes from a single dimension of time, namely the immediate present, and then miss a lot of what is really going on there. The exciting part can be returning time and time again and seeing and understanding what goes on when we're not actually looking. The White Mountains are also a back drop for myriad human activities that took place all those thousands of years. White Mountain Sojourn will also be looking at some of the changes occurring at the present interface of human activity within this wild, beautiful forest ecosystem.

A little more about the author


I grew up in the White Mountains of New Hampshire. I lived in Intervale and North Conway, NH, from the late 1940's to the late 1950's. In 1961 I started working for the Appalachian Mountain Club as "croo" in the huts and eventually as a guide and naturalist. I continued working for the AMC during my college years. I took an inordinate amount of time to finish my undergraduate studies in plant ecology. To make it look like I was being productive I began writing what I hoped was an impressive-sounding Ecology of the White Mountains. With that grandiose title I received some useful notoriety but the problem was that I never really wrote anything. I kept up a facade the secret of which was just to act really cool. I pretended to be busy with small research projects that were supposed to relate to my Magnum Opus. One was titled "Comparative Frost Hardiness in Two Species of Larch." It was ingenious if only because it allowed me a great deal of free time during the warm months. I did manage to help others finish their research projects. I assisted L. C. Bliss for a while as he put together his brilliant Alpine Zone of the Presidential Range and also helped my friend and colleague Larry Collins with his limnological study of the alpine lakes of the White Mountains. So, to bring you up to date Ecology of the White Mountains is still unfinished--a collection of musty, dog-earred notebooks just itching to get done--if only for old time's sake. So come along while I get it out of the box and rethink and redesign it. You can help by adding your thoughts, articles, insights, photos, criticism, etc. We can revisit every mile of the "Whites", bask on the summits, run down the trails, delight in the beauty.

Note: Appalachia is the journal of the Appalachian Mountain Club. It is published twice yearly. It is now in it's 133 year of publication. Information on Appalachia can be obtained by contacting the AMC, 5 Joy Street, Boston, MA 02108.

Harris, Stuart K., Plants of the Presidential Range, a seven-part series published in Appalachia 1940-1946 with reprints published by the AMC.

Harris, Stuart K., Merriam Underhill (and a host of other botanists), Mountain Flowers of New England, AMC Boston, 1964. out of print.

Newcomb, Lawrence, Wildflower Guide, Little, Brown, Boston, 1977. A comprehensive manual of plants in the Eastern US.

Steele, Frederick L., At Timberline; A Nature Guide to the Mountains of the Northeast, AMC, Boston, 1982. out of print.